Garlic Ring Bologna is a great choice for lunch – it’s easy, delicious and a natural fit for sandwiches – but that doesn’t mean you can’t enjoy its unique garlicky flavor at other meals.

Bring Garlic Ring Bologna out of the lunchroom and over to your breakfast nook or dinner table with these two simple recipes. Each one pairs Garlic Ring Bologna with a few other ingredients; feel free to adjust, subtract or add to your liking. For example, the breakfast recipe can also include potatoes, chopped fresh veggies, or anything else that would be at home in an omelet. Let your creativity soar! 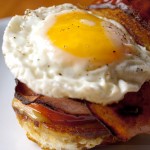 4-6 slices of Garlic Ring Bologna
4 eggs, scrambled or sunny side up
1 handful of shredded cheese, cheddar or 4-cheese blend

Lubricate skillet with butter, margarine or cooking spray. Place sliced bologna into skillet and begin to fry, approximately two minutes. While bologna is frying, crack eggs into skillet and scramble along with bologna, stirring to evenly cook both eggs and bologna. Add any additional items – chopped veggies, potatoes, etc. – and continue to cook along with eggs and bologna. Remove from heat and sprinkle cheese on top; when cheese is melted, it’s ready to serve.

Combine sauerkraut and brown sugar in a slow cooker. Add Garlic Ring Bologna, cut into ½ inch slices. Stir to mix ingredients. Cover and slow cook up to 6 hours. Serve with a side of potatoes.

These are just two possibilities for Garlic Ring Bologna beyond lunch!